Have a flight over Alderney.

Measuring only 8 square kilometers Alderney is the third largest of the Channel Islands. It was occupied on 2 July 1940 after almost the entire pupulation of the island was evacuated to England. The period following was relatively quiet. Then from 1941 on large amounts of troops, forced labours and building material were shipped to the island. The OT set up four laborcamps which were named after German Northsea islands (Borkum, Helgoland, Norderney and Sylt). Both forced labours and German volunteers were housed in these camps. Borkum was set up for German volunteers, the other camps were practically concentration camps were the labours were threated with much brutality.

Alderney got fortified with a large amount of both St and Vf bunkers. Just like on the other Channel Islands pre-600 designs were used. The coastal lines were defended by 10.5 cm K331 (f) guns and 4.7 cm Festung Pak 36 (t) in casemates. A large amount of Mg and mortar positions defended the Wn and Stp. In the hills inland longstretching field order defencelines were set up.

The northern coast is the most important because of the large sandy beaches and Braye Harbour. The most fortified Stp can be found here with as highlights Stp Josephsburg (Fort Grosnez) with its SK, Bt Marcks and Bt Elsas at Fort Albert and Stp Biberkopf (Bibette Head) which is just a very complete Stp with all sorts of bunkers. Heading to the east which is hardly defended directly at coast. However somewhat more inland there're defencelines with lots of mortars (of which one is a M 19 in a 633) and Mg positions and at Mannez Garenne, a large hill, a 8.8 cm Flak battery was erected. This could probably aim at targets at sea too. From the eastern coast to the southern coast we arrive at Longis Bay where the biggest anti-tankwall of the island can be seen. Going westwards towards Essex Castle, located on a high hill. The steep rocky coast starts here. Because of this, a big part of the southern coast is not very suitable for large scale landings and it's thus 'less' defended, on Alderney this means less St bunkers were built, with large parts covered by minefelds and Wn with Vf bunkers and tankturrets. In the south-west corner at Giffoine the Germans built the naval battery 'Annes'. It's a beautiful textbook example of an early German naval battery. Further up to the north we arrive at Stp Türkenburg (Fort Tourgis) with the trenches of Wn Müllerhof partly inland. This ends our tour along the coast.

The earlier mentioned inland defencelines seem to have disappeared but beneath brambles a lot remains. This is especially the case at the Golf course and Stp Steinbruch in the east. In the hills in the central north there are still some Vf bunkers to be found. HQs can be found in St Anne (Luftwaffe HQ in Vf bunker with tower), at Stp Ho-Höhe (Les Rochers, Festungskommandant in a 609) and at Stp Tafelberg (Le Rond But, MAA HQ in a 608).

We have counted a total of 50 St bunkers and dozens of Vf bunkers, Tobruks and other non-St buildings.

The island can be visited by boat from Cherbourg, Dielette, St Malo in France and from several harbours in England via Guernsey or Jersey. Planes are flying directly from Cherbourg and Southhampton, Bournemouth and Shoreham or via any major airport in England via Guernsey or Jersey. The small population of the island (around 2500) is very kind and visiting the bunkers is not a problem. Again, ask permission first if you want to visit something on private grounds, they will always let you in. A great book to obtain if you are going to visit Alderney is "Festung Alderney" by Trevor Davenport, buy it directly from him: trevordavenport2(at)gmail.com.

Get a detailed map of the island in one of the shops over there. We start in the north-west at Fort Tourgis and go clockwise along the coast. Then we will show some inland sites. 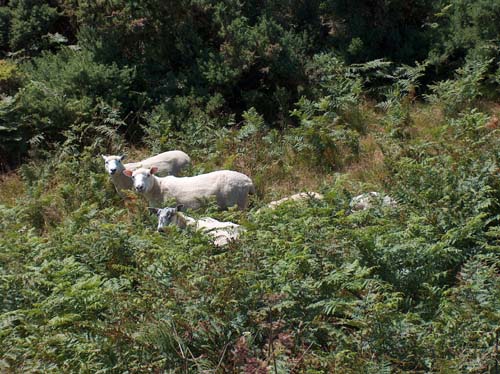